Is the keto diet really a healthy weight loss program in the long run?
Who wouldn’t like a weight loss program that promotes having bacon as a snack? Although true devotees of the current keto diet movement would undoubtedly argue that being allowed to eat bacon and other high-fat foods is not the prime motivator for their allegiance to this eating philosophy, it certainly gets the attention of those growing weary of placing their standard order for “salad, but hold the dressing”.
For anyone on social media, it is nearly impossible to spend much time scrolling through photos and posts without seeing evidence of dramatic weight loss and delicious, typically-taboo foods that are purported to go together. Of course, do any sort of search on the health consequences of eating the way the keto diet recommends and there will be link after link to sources warning caution. As with so many things today, it is increasingly difficult to cull fact from promotion. Perhaps the best place to start is to do a little research on why the keto diet was developed in the first place.

Origin of the Keto Diet

It all started with Meryl Streep. Technically, not true, but the famous actress starring in the film First Do No Harm, in 1997, about a young boy with severely debilitating epilepsy having his seizures controlled by a ketogenic diet did help launch the diet into public awareness. The ketogenic diet got its start in the 1920s at the Mayo Clinic in an attempt to mimic the effects of fasting on the metabolism. The goal, which proved successful, was for the treatment of epilepsy. Variations of the ketogenic diet were later developed as treatments for other neurological conditions, like Parkinson’s and Alzheimer’s diseases, as well as conditions associated with metabolic dysfunction, like cancer.
It was not until very recently that ketogenic became keto and a new weight-loss diet craze was launched as a result of research done at the Sapienza University in Rome by the Italian professor of surgery, Dr. Gianfranco Cappello. Approximately 19,000 participants in Cappello’s study were given a high-fat liquid diet designed to put them into a state of ketosis. This resulted in an average 20-pound weight loss.
Soon there was a wave of diet gurus promoting this new way of losing weight that involved high-fat food rather than being restricted to only liquids. The basic breakdown consists of a daily intake composed of 70% in fat, 20% in protein and the remaining 10% spent on carbs, which equates to a single piece of fruit or half a bagel’s worth of carbs for the day.

What’s the Verdict on Keto? 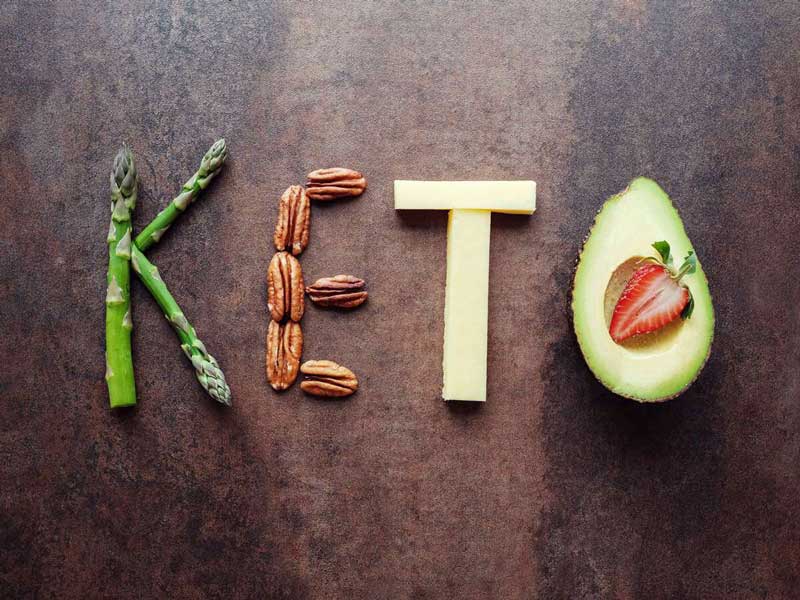 Throwing the body into ketosis can have beneficial outcomes. As mentioned earlier, it has proven effective for reducing seizures and there is ongoing research with regard to other brain-related benefits, as well as the possibility that it may help control sugar levels in the blood for those with diabetes.
Is maintaining a keto diet an effective way to lose weight? Ketosis does initially force the body to burn fat rather than carbs which does lead to weight loss.
On the downside, whether the keto diet is effective in promoting and maintaining weight loss for the long term is currently unknown. Plus, there are lists of side effects that plague extreme carbohydrate restriction, including headaches, constipation, fatigue, flu-like symptoms, inflammation and the signature bad-breath that goes with being in ketosis.
Achieving and maintaining a healthy body weight is important. Your best chances of doing so while also taking care of your overall health and wellbeing is by consulting with a trusted healthcare professional who will help design a program suited for your individual needs.
At the Southern California Center for Anti-Aging, we know how important weight control is to health and well-being, and we believe that safe and life changing weight loss can be attained and maintained when properly supervised. Weight control is extremely important, but our bodies must also be well-nourished in order to function properly and keep our immune systems at the ready. Once we have diagnosed your particular case through carefully administered tests, we prescribe the diet, or combination of diets, that we know will work for you. To learn more about our weight loss programs or if you have questions about any of our services, take advantage of our Free Consultation by clicking here to use our convenient online form.

Contact Us Online
Recent Posts
Our Office
23211 Hawthorne Blvd, Ste 200A
Torrance, CA 90505
Dr Goldstone has given me a life! I am off of insulin & glipizide for my diabetes. I have lost 24.4lbs in about 6 weeks. I am a 55 year old woman. I CANNOT remember when I was in the 160’s This experience has been amazing.
Dr Goldstone is an amazing doctor. Her staff are great always friendly and super nice.
— Valerie M.
Website developed in accordance with Web Content Accessibility Guidelines 2.0. If you encounter any issues while using this site, please contact us: 424.247.4962
×